Courage along with wisdom, justice and moderation, is among the four principal virtues defined by Plato, a Greek philosopher.

The virtue of courage is a quality that everyone has cherished. It was only recently that it has been studied so closely, trying to define what it is and is not, where it comes from and how it manifests to anyone and why such a virtue lovable.

George Kateb, a political theorist at Princeton has said, “One of the worst reproaches in the world is to be called a coward.”

Like many others, courage is most readily manifested in time of war by a soldier while in line of fire retrieving an injured comrade, however, Dr. Kateb is not amenable to such contention and manifestation that only in war that people find the depth and the true meaning of their nobility.

In a study made By Stanley Rachman of the University Of British Columbia on paratroopers as they prepared for their first parachute jump.

He has revealed three groups: the preternaturally fearless, who jump without hesitation; the timid, whose fear kept them from jumping; and finally those who reacted physiologically but who acted like the fearless leapers and jumped.

Dr. Rachman defines courage as “behavioral approach in spite of the experience of fear.”

A social critic and novelist, Marilynne Robinson, has observed that courage is “dependent on cultural definition.” Where religious martyrdom is lionized, there will be martyrs; where social or political protest is seen as glorious, there will be a rash of red-faced declaimers.

In an interview of 320 children from ages 8 to 13 by Peter Muris of Erasmus University Rotterdam and his colleagues, they have found that children have equated courage with the conquering of one’s fears.

More than 70 percent of the children claimed that they had performed bravely acts, including stealing money from one’s mother’s wallet.

Wildlife Conservation Society biologist, Joel Berger in Montana has distinguished between animals that behave boldly for lack of experience and those who have been aware of the danger and yet has continued in the face of it.

He cited an incident when they immobilized a young bison in preparation to take up blood samples but in their return an adult male bison standing guard thereby preventing them to approach.

Dr. Berger consider the male bison act, as courageous and heroic despite probable reprisal by man in that instance.

A neurobiologist at the Weizmann Institute of Science in Rhovot, Israel, Yadin Dudai and his colleagues, scanned the brains of people with a snake phobia.

There is an activation of the human brain region called the subgenual anterior cingulate cortex when people suppressed their terror.

The structure has been implicated in depression and humane behavior, and is believed to help negotiate between emotion and cognition, impulse and calculation.

The bundle of neurons as big as a thumb, acknowledges fear but then move to stop it. It does this in large dose by subduing the amygdala, long known as the brain’s headquarters of fear. 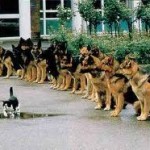 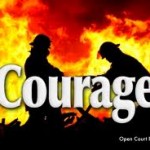