The injunction, however, does not cover publications outside France.

The royal couple had claimed that they were entitled to their privacy and they believed that the French magazine had broken the law in this regard.

In its ruling, the court cited article 9 of the civil code that states that ‘any person, whatever his fame, his present or future functions, has the right to the respect of his private life and image.’

The court further said: “These snapshots which showed the intimacy of a couple, partially naked on the terrace of a private home, surrounded by a park several hundred meters from a public road, and being able to legitimately assume that they are protected from passers-by, are by nature particularly intrusive.”

The court also ordered the publishers to handover the original photographs within 24 hours or face a daily fine of US$ 12,000.

The pictures are already widely available on the Internet and have been printed in Ireland’s Daily Star newspaper and Italy’s Chi magazine.

The Italian magazine Chi along with Closer printed a special edition featuring more than 20 pages of the photographs, while the Irish Daily Star editor Michael O’Kane has been suspended and investigated in carrying out the publication of the controversial photographs.

However, if Closer were to print more issues of the magazine, the royal couple would be within in their rights to demand its withdrawal ‘within 24 hours’.

The royal couple’s lawyers had not asked for copies of the magazine already in newsagents to be removed from shelves as ‘the damage has already been done’. 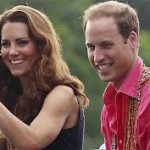