The Department of Environment and Natural Resources (DENR) has warned investors who wanted to purchase land in Boracay need to ask clearance from the agency to avoid buying a property considered as forested area which is illegal.

The warning has been issued amidst the increasing number of people buying their own piece of property in this resort island.

Currently, the DENR is wrapping up its cadastral surveys to make official the ownership of land titles in Boracay.

DENR Secretary Ramon Paje stressed that based on a 2006 Supreme Court ruling, ‘Boracay is still owned by the state, and this will lapse by 2016.’ Until then, the government has the opportunity to ‘correct and plan for a more sustainable development of the island’.

“Property buyers must first seek DENR classification on the lots being considered for buying. Whether it is an alienable and disposable land or forest land use for tourism purposes, this is an important consideration,” said Merza Samillano of the Community Environment and Natural Resources Office (CENRO).

DENR has not issued any environmental compliance certificate for any building or establishment being constructed on the island ‘until such time Boracay has been planned properly,’ according to Paje.

The DENR has already prohibited the building of development structures in forest land here.

Meanwhile, President Benigno S. Aquino had already issued an order directing the DENR and the justice, interior and local government, and tourism departments to study the carrying capacities of Boracay Island, and to look into cases of ‘over-building’ the area.

Carrying capacity refers to how much load an area can take over a given period of time from factors such as population and infrastructure without adversely affecting the environment.

In addition to issues on water pollution, environmentalists have also raised concerns about how the bat population in Boracay has dwindled because of disturbance to their habitats.

Paje likened the decision-making situation of the DENR on issues like Boracay to ‘a high-wire act in balancing economic development with environmental protection.’ 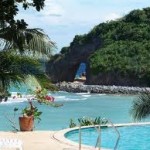