The move to create a government agency to exclusively cater for the needs of Overseas Filipino Workers (OFW) is a welcome development.

The government should consider as a priority and should give their unwavering services to adequately address the problems of OFW around the world in these difficult times. Hence, their support is badly needed.

The political unrest in other parts of the Middle East where the work of the OFWs have been disrupted, it is but fitting that they need government’s help by either repatriating them back home or moving them to safer grounds to protect them from untoward harm and secure their safety.

The OFWs are considered the unsung heroes in the real sense who provide the shot in the arm of the gasping for breath Philippine economy, to keep it afloat.

The remittances of the OFW serve as the financial buffer on the country’s economy despite the financial crisis that is happening worldwide.

It is but proper that the Philippine government has to take care of them as a token of gratitude to their hard work and sacrifice.

The Central Bank of the Philippines has shown that the money sent by OFW stood at US$ 18.88 billion dollars in 2010, of which US$ 2.94 billion dollars came from the Middle East. 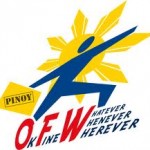