Satellite tracking devices are now small and affordable enough that they can monitor the precise location, including the depth, of large numbers of sea creatures.

Although the concept has existed for some time, it has only recently become technologically feasible to constantly monitor endangered animals and shift conservation areas accordingly.

To prevent endangered sea creatures like turtles, sharks and others from dying out the designated no-fishing zones or sanctuary, they ought to be made mobile to ensure the species are always protected, experts said.

Commercial fishermen then can be told by authorities not to enter certain areas and avoid using particular types of equipment at set times of the year in order to limit the risk they posed to endangered species, according to researchers.

This would be particularly useful in so-called ‘convergence zones’ where opposing currents pushing together create vast fields of plankton and attract the rest of the food chain, making the waters especially crowded.

One of the largest examples, the North Pacific Convergence Zone, moves 1,000 km from north to south seasonally, crossing waters used by Hawaiian fishermen.

The zone is also used as an ‘interstate highway’ for loggerhead turtles, a critically endangered species, as they migrate, researchers said at the American Association for the Advancement of Science (AAAS) annual meeting in Vancouver.

Larry Crowder, professor of marine biology at Stanford University, said: “The North Pacific Convergence Zone is always there, but it moves.

Making conservation areas mobile would also account for non-annual ocean trends, like El Niño, and the effects of climate change which are causing species to move from their traditional habitats, he added. 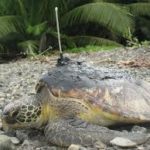