Demi Moore smiled for the cameras at a private party in Beverly Hills as she made her first public appearance since her recent stint in rehab.

The actress looked healthier and appeared to have put on some much needed weight.

A day after she made her Twitter comeback, the Ghost star attended soiree in Beverly Hills to support her best friend Amanda de Cadenet.

She was with Editor of InStyle magazine Ariel Foxman and her friend Amanda de Cadenet at the launch of her show ‘The Conversation’, which Moore executive produces.

Last year the star’s drastically shrinking frame sparked alarm and she looked a shadow of her former self as she stepped out to the premiere of her movie Margin Call in New York back in October.

The 49-year-old actress has had a troubling few months, following the breakdown of her marriage to Ashton Kutcher.

But now it was a different story. She looked relaxed and happy, wearing a black ensemble, beige blouse and chic jewellery and she was seen here posing in a group shot with Joy Bryant, stylist Rachel Zoe, Foxman, de Cadenet and John Travolta’s wife Kelly Preston.

Moore also found time to tweet her fans, revealing she is finally ready to change her Twitter name @MrsKutcher.

‘Time for a change, twitter name change, any suggestions?’ she wrote.

Moore announced her intention to divorce Kutcher last November, although proceedings are yet to be executed by either party. 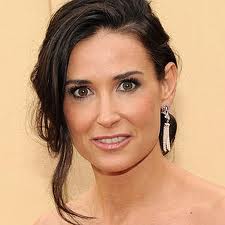