The announcement comes after months of media reports about problems between the Hollywood power couple, who married in 2005 when she was 42 and he was 27.

The marriage is one of the most high-profile unions in Hollywood since she married the younger actor in 2005.

Moore added that it was a trying time for her and her family, and asked people to respect her privacy.

“This is a trying time for me and my family, and so I would ask for the same compassion and privacy that you would give to anyone going through a similar situation,” she said in her statement.

Kutcher, who recently took over from troubled star Charlie Sheen in the hit TV series “Two and a Half Men,” tweeted a poignant message minutes after Moore’s announcement.

“I will forever cherish the time I spent with Demi. Marriage is one of the most difficult things in the world and unfortunately sometimes they fail. Love and Light, AK,” he wrote.

The couple created the Demi and Ashton Foundation, in 2010 to combat the organized sexual exploitation of girls around the world.

Moore was married twice previously, the first time to singer Freddy Moore and the second to film star Bruce Willis, with whom she has three children Rumer, Scout and Tallulah Belle.

Moore and Willis divorced after 13-year marriage in 2000. 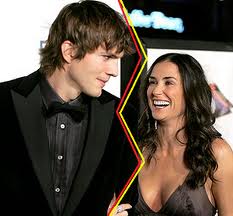