The warning from the Portuguese umpire Carlos Ramos about slow play had disrupted his rhythm claimed Tsonga, during his four-set loss to Novak Djokovic in the Wimbledon semi-finals on Friday.

The Serb, a two-time Australian Open champion, improved his record to 47-1 this year. And although he won another Friday, it was Tsonga who entertained the crowd with his tennis skills and showmanship.

The flamboyant Frenchman was involved in several thrilling rallies with Djokovic, flinging himself across the turf to make volleys and earning rapturous applause as he lay prone on the grass.

After Tsonga’s return on match point sailed out, Djokovic dropped to the ground and lay on his back. A few seconds later, he knelt down and kissed the grass.

Djokovic will face either defending champion Rafael Nadal or Andy Murray in the final. 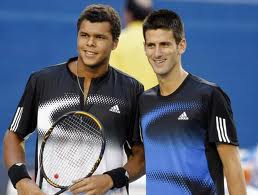