Schwarzenegger and Maria Shriver separated in May after it has been known that the former had fathered a child out of wedlock.

Their separation for good cites ‘irreconcilable differences’ as the reason to end their 25-year marital life.

The couple have four children together. Shriver is seeking joint custody of two minor sons, aged 17 and 13.

The filing of the case in court, signals an end to a union that brought together two distinct celebrities at their own right, a fitness guru and a heiress of the Kennedy clan, who was herself a journalist and tv network newscaster.

Shriver’s filing of divorce proceedings does not indicate the couple had a prenuptial agreement.
That means Schwarzenegger’s earnings from a career as a Hollywood megastar since 1986, will likely be evenly divided with Shriver.

Shriver is seeking spousal support but the amount will be determined later, either through a settlement or by a judge. The divorce is expected to be handled mostly behind closed doors.

Mr Schwarzenegger was elected Republican governor of California in 2003. He left office in January, planning to resume his career in Hollywood. 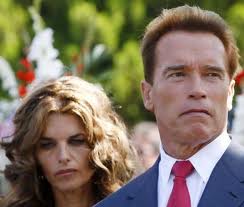