Defending champion Novak Djokovic and Roger Federer, eased into the quarterfinals with straight-set wins over their rivals respectively.

Djokovic defeated Stanislas Wawrinka 7-6 (5), 6-4, but warned organizers, he would skip next year’s tournament if it didn’t go back to the traditional red-clay surface.

Switzerland’s Federer will overtake second seed Nadal as world number two behind Djokovic if he wins in Madrid.

World number two Nadal lost 6-3, 3-6, 7-5 to Fernando Verdasco in round three and blamed the slippery courts for his first defeat in 23 matches on clay.

It was Nadal’s first defeat to Verdasco in 14 matches.

Djokovic will next play either fellow Serb Janko Tipsarevic or Gilles Simon of France, while Verdasco will face Tomas Berdych after the Czech beat Gael Monfils 6-1, 6-1.

Federer understood his co-top players frustration as far as the blue surface is concerned. “I understand (Nadal’s) disappointment. He was against blue clay from the start and so was I,” said Federer.

“He never felt comfortable on the surface. It is a tough surface and that can only add to the anger even more.” 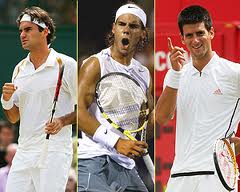