The Serbian has been almost invincible this year when he survived a 30-point classic against Ukraine’s Alexandr Dolgopolov.

Djokovic’s next opponent is his Davis Cup team mate Janko Tipsarevic, who beat former world number one Juan Carlos Ferrero of Spain 7-5 6-7 7-5 6-2 in a slugfest that lasted almost four hours.

The win, marked the Swiss master’s 30th successive trip to the quarter-finals of a grand slam event, dating back to the 2004 French Open.

The 16-time major champion advanced to a clash against 11th seeded Frenchman Jo-Wilfried Tsonga, who rallied to overcome eight-seeded American Mardy Fish in five sets earlier in the day. 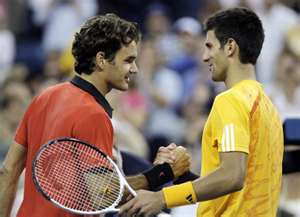