Djokovic, playing for the first time since his French Open final defeat to Rafael Nadal, was far too classy for Ferrero and will face either America’s Ryan Harrison or Lu Yen-Hsun of Taiwan for a place in the last 32.

The 25 year old Serb opted to take a break after that defeat in Paris rather than play in a grass-court warm-up.

Initially Ferrero offered more baseline resistance than he might have been expected away from his favored clay, but it didn’t take long for the Serb to get back into his groove and he emphatically wrapped up the match in 98 minutes.

Federer advanced with ease as he started his bid to equal Pete Sampras’s record of seven Wimbledon titles.

The Swiss fired down nine aces in his straightforward win over left-hander Ramos, the world No.43 who has never won a match on grass. 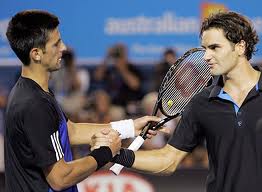