Researchers have discovered a high concentration of bacteria in the center of hailstones, suggesting that airborne microorganisms may be responsible for that and other weather occurrence.

Alexander Michaud of Montana State University in Bozeman and his colleagues analyzed hailstones over 5 centimeters in diameter that were collected on the University campus after a storm in June 2010.

The large hailstones were separated into 4 layers and the meltwater from each layer was analyzed. The number of culturable bacteria was found to be highest in the inner cores of the hailstone.

Michaud’s research is part of a growing field of study focusing on bioprecipitation, a concept where bacteria may initiate rainfall and other forms of precipitation including snow and hail.

The formation of ice in clouds, which is necessary for snow and most rainfall events, requires ice nuclei (IN), particles that the ice crystals can grow around.

A diverse range of particles are capable of serving as IN, but the most active naturally occurring IN are biological in origin, capable of catalyzing ice formations at temperatures near -2 degrees Celsius. The most well-studied biological IN is the plant pathogen Psuedomonas syringae.

Aerosol-cloud simulation models imply that high concentrations of biological IN may influence the average concentration and size of ice crystals in clouds, horizontal cloud coverage in the free troposphere, precipitation levels at the ground and even insulation of Earth from solar radiation.

In 2008, Brent Christner of Louisiana State University reported finding significant numbers of bacteria in snow found around the world.

Dr Christner, also present at the meeting, said the result was another in favor of the bioprecipitation idea, that the bacteria’s rise into clouds, stimulation of precipitation, and return to ground level may have evolved as a dispersal mechanism.

“It’s an interesting idea that’s been thrown around for decades but only recently has the data accumulated to support it,” he told the meeting. 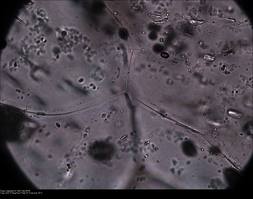