The story in Iraq is an unfinished business, whatever American officials in the administration may say, the country is neither occupied nor independent but rather put Iraq in limbo.

The US military had left Iraqi cities which a welcome development to the locals who are not accustomed that their lands would be occupied by foreign invaders.

By end of August, it was supposed to bring the number of soldiers down to 50,000. American officials perspective of the US withdrawal from Iraq usually dictates how they set this notion of time, in particular whether deadline reflects the ambiguous reality here these times.

Hoshar Zebari, Iraqi’s foreign minister has recalled of what Iran’s president Mahmoud Ahmadinejad has told him in a sarcastic note, “The Americans planted a tree in Iraq, they watered the tree, pruned it and cared for it, ask your American friends,” while shaking his head in disbelief, “why they are leaving now before the tree bears fruit?”

“It certainly is American politics and it is American culture, the sense that we are an impatient people,” said Ryan Crocker, a former ambassador to Iraq and a veteran diplomat in the Arab world. “Tomorrow or the day after tomorrow, at the latest and if that’s not going to happen, we’re going to move on.”

The military calls the timing right as do many diplomats, even they acknowledge the impact of American domestic politics.

The Middle East has long suffered under a peculiarly American notion that if the world’s greatest power wants something, it will somehow come to pass, on its schedule.

In Lebanon, the Palestinian territories and Syria, the messy realities never quite fit. Since 2003, they rarely have in Iraq, either. “Patience is always in short supply in Washington,” said Mr. Zebari.

It is perhaps a cliche, the way the past intersects with the present in the Middle East, though not necessarily untrue. For Arabs, the Crusades resonate in the creation of Israel. Wars in Iraq are cast in millennium old narratives of martyrdom. Perspective becomes politics, so does patience. 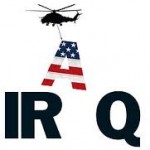