Germany best performance since reunification 20 years ago which is equivalent to nearly 9 percent annual economic growth rate or a quarter on quarter economic growth of 2.2 percent as it was announced by the government.

Statistics has supported Germany’s view that they are on the right track all along. The figures also show that German workers and companies in recent years made the short term sacrifices necessary for long term success that Germany’s European partners did not.

Germany are heads on with its European partners over how to respond to the financial crisis, it has argued with the US over the benefits of stimulus package against fiscal authority and defiantly pursued of how to keep its economy strong.

With its own economic vision, it has reinforced its position and spread the conviction among policy makers that they handled the financial crisis and the painful recession that follows it far better than the US.

By reducing unemployment benefits, easing rules for hiring and firing and management and labor are working together to keep a cap on wages.

Germany ensured that it could again export its way to growth with competitive fast moving companies producing cars and machine tools which the world’s economies demanded.

During the recession, Chancellor Angela Merkel resisted the less severe of government spending that the US and some European partner, felt was crucial to restoring growth.

The battle over how to navigate the financial crisis helps display Germany’s emerging post cold war identity as a country less tolerant to foreign demands.
German government officials are confident they found the right approach including a better solution to unemployment.

They extended the “kursabeit” or short work program to encourage companies to furlough workers or give them fewer hours instead of firing them.

The very sacrifices that have helped the country outpaced its weaker, less discipline European partners, including lower welfare payments, have resulted in a deep feeling of insecurity.

As the latest numbers show, Germany is outproducing its neighbors by a wider margin. If policy makers in Berlin are right and the turning point has been reached, they will look wise.

If the fragile economic recovery cracks, they could still bear the brunt of the blame for doing too little to foster regional and global growth. 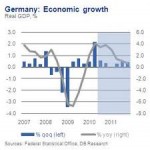