According to a German researcher canines had learned many variation of communication during the 14,000 years they had lived with humans.

The wolf, a close relative of the dog, hardly ever barks and older dog species like the Alaskan Malamute and Samoyed dog share this kind of behavior according to Dorit Feddersen-Petersen from the zoological Institute at the University of Kiel.

Several dog species have learned to communicate with humans through an increasing range of barking sounds. “Some of the modern dog species like the terrier and sheep dog have a wide barking spectrum which is intended as a means of communication with man, says Freddersen-Petersen.

“Vocal sounds are more impressive than the body signals used by the wolf,” the researchers noted. Dogs can relate to humans through their barking language which is much clearer than just pointing the nose, but both expression or signal really work.

A high pitch barking coupled with tail wagging and the paws pressed to the ground mean “Play with me!”

On the other hand, a deep bark with upright tail and hair on end say “Stay away from me or else!”

It can be very useful for dog owners and people in general some variations of the dog language, the researchers concluded. 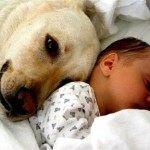