Dojo (Misgurnus anguillacaudatus) known as the Japanese loach, was introduced into the Mountain Provinces by Japanese troops during World War II.

And it is still popular in the provinces of Ifugao, Benguet, Mountain Province, Kalinga-Apayao, and Abra in northern Philippines.

The rare and diminutive fish dojo is a delicacy, highly sought and an essential ingredient of ifugao cuisine.

The Ifugao Terraces Commission (ITC) is popularizing the cultivation of the dojo, not only as a supplementary source of protein but as an important part of the Ifugao rice culture.

According to Juan Dait, head of the ITC, dojo population is dwindling and they are propagating it so it would remain as part of the local rice-fish culture.

Indeed, a water depth of 25 to 30 centimeters is maintained in the rice terraces for the purpose of cultivating the dojo. It is also the reason why Ifugao farmers do not use chemical fertilizers in rice cultivation.

The dojo has adapted to the particular ecosystem of the IFugao rice terraces. The fish is quite difficult to catch because it burrows on soft mud and as a survivor they are tempered with adverse environment.

An accessory breathing organ is used during dry season when the dojo is buried in mud or moist earth it remains inactive over prolonged periods. When the wet season comes, the dojo wriggles free.

It is usually harvested by draining the water in the terraces or with the use of bamboo fish trap called “bubo” baited with cooked rice, boiled camote and mixed with rice bran. Farmers, on average, harvest around 380 kilos of dojo per hectare in rice fish culture.

The dojo at maturity, its sleek body measures 12 to 20 centimeters long with an average diameter of around 2 centimeters.

The dojo is cultured during the rainy months of August to December. In the rice fish farms of Ifugao, the water is fertilized with pig manure mixed with rice straw compost or sunflower tops.

In the Cordilleras, the dojo spawns from May to August. About 10,000 eggs are produced by a single female. The males are distinguished from the females by the presence of a bone-like protuberance in the pectoral fin which is used for mating.

The eggs are fertilized in the water and adhere to the stalks of rice plants. Under normal field conditions (with an average temperature of 25 degrees Centigrade), the eggs hatch after 20 to 50 hours.

With its slender body, the dojo looks like an eel but for its bright color and the presence of short feelers or barbells around its oval shaped mouth. 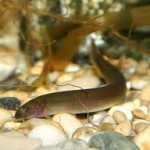 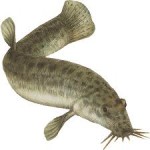