Long stretches of the banks of Mapocho river in Santiago, Chile are lined with garbage, and homeless people live under some of its bridges.

A relatively shallow but rapidly gushing and dangerous flow of water rushes down the middle of the canal year round, swelling to considerable depths only with the snow melt from the nearby Andean mountains that form Santiago’s dramatic horizon.

The river, which runs for 34 kilometers (21 miles) through the capital was turned into a concrete trench many years ago and stopped as Santiago’s open sewer only last year, when a sewage treatment system was installed to collect waste water.

Chile President Sebastian Pinera is determined to fulfill an old dream. Turning the once sewage carrying river through the center of the capital into a navigable waterway, lined with parks and attractions.

Pinera laid the first stone in the initial US$ 28 million dollars phase of the project, a riverside park to be financed with private donations.

The riverside park project shall become a big attraction for Santiago’s citizens. Slowing a section of the river with a system of five locks, the idea is to feed a lagoon where people can row in small boats. There shall also be a large swimming pool, green spaces for picnics, a huge fountain and a Ferris wheel.

Pinera has dreamed about this project for a long time and went public with the idea in 1990, asking his architect friend Cristian Boza to develop plans. At the time, the center left government scoffed at the idea, and the project was shelved.

Many doubted the river could ever be navigable. As soon as he became president last March, the billionaire entrepreneur revived his dream.

Inspired by Barcelona’s transformation ahead of the 1992 Olympic Games, Pinera told Boza that Santiago could do the same, and Boza drew up plans for the entire for the 21 mile urban stretch of Santiago’s river.

Pinera hopes to encourage a greening of Santiago’s most gritty neighborhoods with the Mapocho river project, which is finally beginning in earnest and is expected to be completed before he leaves office in 2014. 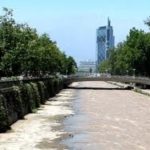 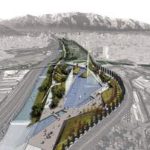 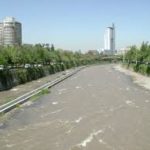