The three tangibles seen that could cause collapse of the ecosystem as early as this century include climate change, population growth and environmental destruction, scientists warned in the journal Nature.

The warning contrasts with a mainstream view among scientists that environmental collapse would be gradual and take centuries.

The study appears ahead of the June 20-22 UN Conference on Sustainable Development, the 20-year follow up to the Earth Summit that set down priorities for protecting the environment.

The paper by 22 top researchers said a ‘tipping point’ by which the biosphere goes into swift and irreversible change, with potentially cataclysmic impacts for humans, could occur as early as this century.

The Nature paper, written by biologists, ecologists, geologists and palaeontologists from three continents, compared the biological impact of past episodes of global change with what is happening today.

To support today’s population, about 43 percent of Earth’s ice-free land surface is being used for farming or habitation, according to the study.

On current trends, the 50 percent mark will be reached by 2025, a point the scientists said is worryingly close to the tipping point.

If that happened, collapse would entail a shocking disruption for the world’s food supply, with bread-basket regions curtailed in their ability to grow corn, wheat, rice, fodder and other essential crops.

The factors in today’s equation include a world population that is set to rise from seven billion to around 9.3 billion by mid-century and global warming that will outstrip the UN target of two degrees Celsius (3.6 degrees Fahrenheit).

The team determined that once 50-90 percent of small-scale ecosystems become altered, the entire eco-web tips over into a new state, characterized especially by species extinctions.

Once the shift happens, it cannot be reversed.

“It really will be a new world, biologically, at that point,” said lead author Anthony Barnosky, a professor of integrative biology at the University of California in Berkeley.

“The data suggests that there will be a reduction in biodiversity and severe impacts on much of what we depend on to sustain our quality of life, including, for example, fisheries, agriculture, forest products and clean water. This could happen within just a few generations.”

The authors stressed it was unclear when this feared tip over would happen, given blanks in knowledge about the phenomenon.

What is important however, they said there were plenty of solutions, such as ending unsustainable patterns of growth and resource waste, that mean it is not inevitable.

In a report on Wednesday issued ahead of the “Rio+20” summit, the UN Environment Program (UNEP) warned that burgeoning populations and unsustainable patterns of growth were driving Earth towards ‘unprecedented’ eco-damage.

Earth today is vulnerable to fast change because of the growing connectedness between ecosystems, voracious use of resources and an unprecedented surge in greenhouse gases, the authors concluded. 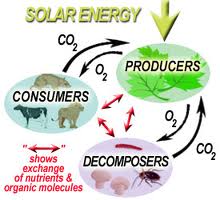