After the expulsion of Egyptian leader Hosni Mubarak by people’s power from the presidency last month, Egypt is to hold presidential elections later this year for the first time, without Mubarak’s participation.

Mubarak has ruled Egypt with an iron hand. His 30 years of dictatorial power has made the political opposition weak.

Nobel laureate Mohamed El Baradei, 68, a leading personality in the reform movement announced his intention to run in Egypt’s presidential election this year.
He wanted a new constitution for Egypt rather than just amendments to spur change.

Political observers, however, want to see of how a post Mubarak Egypt conduct their democratic political life in the coming elections after having been from decades of state oppression and censuring political activity.

“When the door of presidential nominations opens, I intend to nominate myself,” El Baradei said on his first live talk show on TV.

El Baradei, 68, the former head of the International Atomic Energy Agency, would oppose constitutional amendments being put to a referendum on March 19, calling for a new constitution instead.

The Supreme Council of the Armed Forces took power after Mubarak was ousted and said it would hold a parliamentary election in June followed by a presidential ballot six weeks later.

According to El Baradei, the path to change in Egypt must begin with a new constitution, calling on the military to delay this month’s referendum or cancel it.

“I will apologize on behalf of all Egyptians to the 40 percent of the population living below the poverty line for the neglect they have seen, and for not having the homes and the lives they deserve,” said El Baradei.

The interview was El Baradei’s first live broadcast since a popular uprising began in Egypt on January 25 and was the first salvo in his presidential campaign. 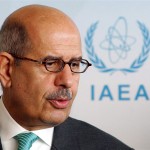