Pippa the younger sister of Kate Middleton, now the Duchess of Cambridge after her marriage to Prince William, has been the center of attraction in the recent royal wedding.

She has been the focus of attention while wearing a body-hugging dress by Sarah Burton of Alexander McQueen at the wedding ceremony.

The maid of honor was stunning in her outfit and can be a cause of envy by other bachelorettes in her stead to have such kind of global exposure.

She studied at the University of Edinburgh with an English Literature after which Pippa began working as an events planner and also runs The Party Times, an online magazine for her parents’ business.

She was named the ‘Number One Society Singleton’ by Tatler magazine in 2008. She’s ahead of Prince William’s cousin Princess Eugenie of York, on the list.

She had gained the media attention and nicknamed her “Perfect Pippa” because of her toned legs, bronzed skin, shiny hair and comfortable in front of the paparazzi cameras.

She is also a close friend of Chelsy Davy, girlfriend of Prince Harry, Prince William’s younger brother. Both Pippa and Chelsy, the night club loving women were often spotted together on and off in downtown London.

Her current boyfriend is a 30-year-old London broker and former England cricketer Alex Loudon, who is a friend of Prince William.

Pippa helped plan the post-reception dance party at Buckingham Palace. Now that Kate is married, will Pippa be next? 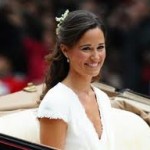