In a survey conducted by Veritas Truth Survey (VTS) in 85 archdioceses and diocese covering all 17 regions in the country during the second quarter of 2012, 57.7 percent of their 2,500 respondents did not have a Church wedding or majority of Filipino Catholic marriages were not held inside a church.

Clifford Sorita, a sociologist who presented the study revealed that the reason why Filipinos appear to be not interested in having a Church wedding might be the perception that getting married in churches is expensive.

Out of 2,500 respondents 57.7 percent did not have a Church wedding. Of the number, 7.5 percent said their marriage vows were not solemnized by a priest while another 50.2 percent gave no answer because they are too shy and not comfortable of admitting that they are married.

While it is true that people perceived church wedding as expensive because of the fanciful events and functions that comes along with it, most people opt for civil wedding instead that of church for economic reasons while others opt to delay any church wedding plans until such time their financial situations improve.

To alleviate the problem local government units (LGUs) in some regions of the country have been sponsoring mass wedding ceremonies or Kasalang Bayan intended not only for the poor couples but also to those who failed to make them despite their plans.

Bishop emeritus Teodoro Bacani, the vice chairman of Catholic Bishops Conference of the Philippines (CBCP), Episcopal Commission on Doctrine of the Faith (ECDF),is not happy with the result. ‘The survey results show the need for an apostolate to get Catholic couples to get married in the church, saying that it is a cause for serious pastoral concern.’ 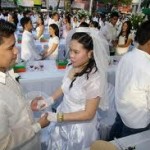