Australia is the driest continent after Antarctica and was in the grip recently of the worst drought in more than a century.

Rivers have risen to records level high and submerged the rural towns and the city of Brisbane to floods, in more than a week long calamity that cost Australia about US$ 3 billion dollars of lost income from agriculture and coal exports.

Brisbane residents sandbagged their homes to overcome of what was an exceptionally high tide and overnight rain that overflowed the main river through the state capital of Queensland.

The Queensland floods have reduced Australia’s coal exports according to the Australian Bureau of Agricultural and Resource Economics and Sciences (ABARE).

In southeast Victoria state, hundreds of homes faced threats over the weekend as four rivers northwest of the state capital Melbourne were expected to reach their highest peaks in a century, said Lacklan Quick, spokesman for the State Emergency Service.

Eastern Australia has endured weeks of massive flooding that the government says could be the nation’s most expensive natural disaster ever. It shut down much of Queensland’s lucrative coal industry and has caused 30 deaths.

Australian media have reported flooding of some homes, businesses and a race course in inner suburbs where more severe flooding has strucked. It was estimated that about 30,000 to 40,000 houses were damaged by the floods in Queensland alone.

Australian farm produce, most of which is exported and that includes fruits, vegetables, cotton and sorghum will be reduced to half billion dollars according to ABARE.

The government’s main forecaster of the farming and mining industries bared, that the lost exports run up to US$ 2.5 billion dollars. 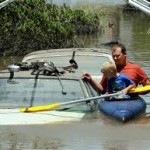 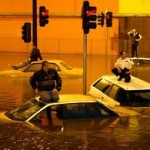 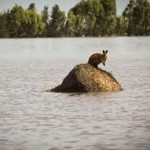