Like trees on its stem, the Dead sea have rings. The sea bed adds two layers of sediment every year. The researchers will analyze half a million years of geological history deciphering the trend and using them to help understand the future, according to Zvi Ben-Abraham of the Israel Academy of Sciences.

They will draw out information on ancient rainfall, floods, droughts and earthquakes that can be used in studies on how to best deal with global warming.

A research team is venturing to drill through 500,000 years of history to unravel secrets of climate change and natural disasters.

Drilling into the bed of the Dead Sea, the group of engineers and scientists began pulling out layers of the earth’s core and will pursue for about 60 days until they reach that depth of 1,200 meters below sea level.

The Dead Sea according to Ben-Avraham, collects water run-off from Egypt’s Sinai desert up to the Golan Heights, an area of about 42,000 square kilometers, giving many materials for climate research.

According to Ben-Avraham, the sediments of the Dead Sea are the best climate and earthquake recorders for the entire Middle East.

It is also on a fault line between two continental plates moving at different velocities, causing much tectonic activity.
The project is part of the International Continental Drilling program, which has seen dozens of holes across the globe in an effort to search the best situation in managing the earth’s resources and environment.

The Dead Sea is a favorite spot for tourists because of the buoyant and healing properties of its extremely salty waters.
Members taking part in the Dead Sea project comes from around the world, including Jordan and the Palestinian Authority. The drilling falls within Israel’s borders.

They will drill a 5 centimeters wide hole (much smaller than those used in finding oil) and would not stop until they reach 500 meters, according to operations manager Beau Marshall. Core samples will be then sent to be analyze and archived, he added.

Operating the rig, 24 hours on a daily basis and contending with the water’s high salt concentration is performed by a Utah based non profit corporation which works on similar projects around the world.

Their barge floating higher than it does in normal waters which Marshall is using requires everything to keep well lubricated and cleaned up because, the salt will indeed jeopardize their equipment and operations. 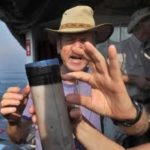 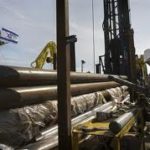 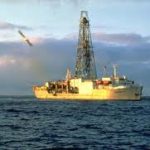