The 34-year-old boxer was also ordered to complete 100 hours of community service and pay a US$ 2,500 fine. The plea deal avoids trial on felony allegations that he hit his ex-girlfriend and threatened two of their children during an argument at her home in September 2010.

The case stemmed from a hair-pulling, punching and arm-twisting argument with his ex-girlfriend Josie Harris while two of their children watched in September 2010.

“Punishment is appropriate,” Justice of the Peace Melissa Saragosa said after a prosecutor complained that Mayweather has been in trouble before and hasn’t faced serious consequences.

The undefeated boxing champion, stood still in a striped olive vest and showed no reaction as the judge sentenced him to six months in the Clark County jail then suspended half the term.

She gave him credit for three days previously served in jail and ordered him to complete a yearlong domestic violence counseling program.

The plea deal avoided trial on felony and misdemeanor that could have gotten Mayweather 34 years in state prison if he was convicted on all counts.

Mayweather Jr. also is expected to plead no contest next week to a separate misdemeanor harassment charge involving a 21-year-old homeowner association security guard who was poked in the face during an argument about parking tickets placed on cars outside Mayweather’s house. 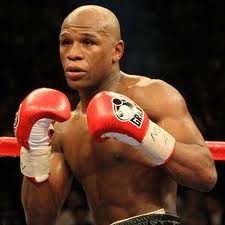