Neil Armstrong is well remembered as the first man to set foot on the moon, and that momentous event happened on July 20, 1969.

Armstrong commanded the Apollo 11 spacecraft that landed on the moon and he radioed back to Earth the historic news of ‘one giant leap for mankind.’ He spent nearly three hours walking on the moon with fellow astronaut Edwin ‘Buzz’ Aldrin.

The former Apollo 11 astronaut commander, who lives in the Cincinnati area and just celebrated his 82nd birthday, went to the hospital on Monday for a stress test. He flunked, the test, and that led the surgeons to bypass the four blockages in his coronary arteries.

Eugene Cernan, the last man to walk on the moon, told NBC News that the 82-year-old’s wife, Carol Armstrong, said her husband was in high spirits.

Fellow Apollo 11 astronaut, Buzz Aldrin, tweeted that he was “sending my best wishes for a speedy recovery, we agreed to make it the 50th Apollo Anniversary in 2019”.

He received the Congressional Gold Medal along with three other astronauts, the highest US civilian award, in November.

Armstrong and his wife married in 1999 and made their home in the Cincinnati suburb of Indian Hill, but he has largely stayed out of public view in recent years. 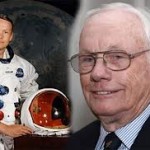