The showbiz industry has been filled with some talks in recent days as negotiations to renew Ryan Seacrest’s contract had become tense, according to insiders.

American Idol judge Jennifer Lopez attended a Television Critics Association discussion panel in Pasadena, California, while executives of the Fox TV network put down rumors that Seacrest is departing American Idol after hosting it for more than ten years.

The business atmosphere for the show seems fine as American Idol run up to its eleventh season starting this month.

The three judges for the eleventh season Jennifer Lopez, Steven Tyler and Randy Jackson and host Ryan Seacrest are back to compliment the show.

The 37-year-old Seacrest is nearing the end of a final three-year contract extension with the network.

Speculations were rife that the TV and radio presenter would not be back after the end of the upcoming season, even though he gets paid a reported US$ 15 million dollars a year to host the high rated show.

However, both Ryan and the executives remained silent about the state of those talks at news conferences on Sunday, a few weeks before the show returns to US TV screens on January 18.

American Idol host Ryan Seacrest with the show’s executive producer Ken Warwick remained tight-lipped but said TV execs said they did want him to stay beyond the current season.

But Fox entertainment chief Kevin Reilly says it has been a ‘tough negotiation’ to make that happen. 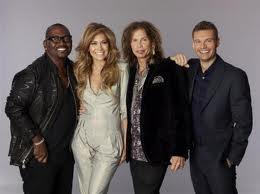