Fred Couples, the U.S. team captain, has told Tiger Woods that he decided to add him to the 12-member Presidents Cup team.

“I’ve told him that he’s going to be on the team,” Couples said. “There is no reason for me to wait till Sept. 26 to pick Tiger. He’s the best player in the world forever.”

Woods has played on every U.S. Presidents Cup team since 1998 but he has been a shadow of his former dominant self since the end of 2009 while trying to rebuild his golf swing and private life following the breakup of his marriage.

Last week Couples warned Woods that he would have to play some more tournaments ahead of the match in November to secure a place on the side as a wildcard.

Couples did not wait for the debate to be initiated over whether Woods would be included on the team.

Ten players automatically qualify for the team based on points accumulated over the past two years. Couples is then given two captain’s picks to round out his squad, which will compete in Australia from Nov. 14-20.

Woods, who is 28th on the Presidents Cup list, had a long summer layoff because of injury and lack of practice. He was sidelined for three months while recovering from the left knee ligaments and Achilles tendon he hurt during the Masters in April, when he tied for fourth.

“In my opinion, when you’re the best player in the world for 12 straight years and you’re not on a team, there’s something wrong,” Couples said. 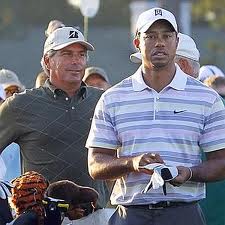