Golf veteran Fred Couples who shot a 67 for the day shares the top spot with fellow American Jason Dufner on five under in the second round at Augusta.

The 52 year old Couples has become the oldest player to lead at the halfway stage of The Masters beating Lee Trevino who was 49 when he jointly led with Nick Faldo in 1989.

World no. 3 Lee Westwood slipped to a one-over 73 in the second round, while McIlroy inched closer with a 69. The Englishman reached six under after a birdie on the 15th and was leading going down 18 but a double bogey at the last dropped him back.

Wotld no. 2 Rory McIlroy reached five under before failing to get up and down from a bunker at the 17th, but then saved par from off the final green for a fine 69.

The US Open champion put himself in an ideal position going into the weekend after getting up-and-down for a crucial par at the last.

“I drove the ball better. That was the big thing,” he said.

Four-time winner Woods, though, is eight behind and survived the cut with only two shots to spare after an error-ridden 75.

“I didn’t quite have it with my swing and unfortunately I had to hang in there and be patient,” said Woods, who won his last Masters in 2005

Phil Mickelson had been four over after a triple bogey seven at the 10th on the opening day, but he followed up his 74 with a 68 to be two under and despite the 18th playing so tough into the wind he birdied it from 18 feet.

World number 1 Luke Donald flirted with the cut but carded 73 to head into the weekend at four over.

Paul Lawrie birdied the last three holes for a 72 and on three under while Ian Poulter reached two under, but he went in the water for a double bogey at the short 16th and after a second successive 72 is alongside Justin Rose and Padraig Harrington.

Graeme McDowell at 72 made it through on three over, as Donald, Ross Fisher and Martin Laird on four over. 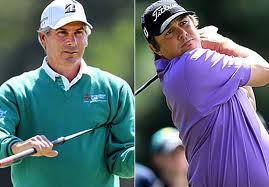