The most common forms of arthritis are osteoarthritis and rheumatoid arthritis. Although it’s difficult to determine the cause of arthritis, common factors attributed to age, weight and lifestyle.

As people get older cartilage becomes more brittle with age and has less of a capacity to repair itself, so they are more likely to develop arthritis.

Excess body weight can also lead to arthritis, this is because our ball joint is partly dependent on the load the joint has to support. This is especially true of the hips and knees that can be worn quickly in heavier patients.

Food we eat which define our lifestyle can lead to arthritis if we are fond of eating foods rich in uric acid. Uric acid as we know destroy the natural lubrication of our ball joint that can caused pain and inflammation due to friction.

Main symptoms of arthritis include pain, stiffness and restricted movement in the joints, and currently there is no cure yet for the condition, only anti-inflammatory painkillers to relieve symptoms, and in severe cases, costly joint replacements are advised.

Scientists have claimed that a molecule, called kartogenin, encourages damaged cartilage to regenerate.

It is now hoped that the substance could form the basis of a new drug-based therapy, targeting the degenerative joint and bone disease which causes cartilage to wear away.

It is thought that kartogenin would be administered via injection to the areas affected.

During the study, published in the journal Science, 22,000 drug-like molecules were tested using a robotic screen, applying each one to bone marrow stem cells.

When kartogenin was administered to mice with osteoarthritis-like symptoms, it prompted stem cells to change into cartilage cells.

However, more work is needed to understand exactly how the molecule works.

According to Judith Brodie, chief executive of Arthritis Care, ‘We welcome what looks like it could be a very promising development for people with osteoarthritis, however we would want to emphasize that this is very early stage research and it is likely to be some years before any treatments are developed.’

Researchers at the Genomics Institute of the Novartis Research Foundation in San Diego and Scripps Research Institute in La Jolla, California said, ‘This may ultimately lead to a stem-cell based therapy for osteoarthritis.’

While Dr. Kristen Johnson, added, ‘We’re excited about the biology because it’s a new way of targeting the stem cells.’ 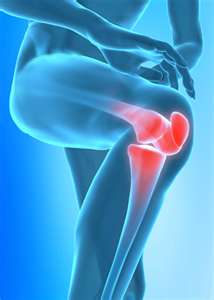