Contrary to what most people believe there is not a lot of fish in salty water compared to that of fresh water.

Scientists made a surprising discovery that freshwater rivers and lakes contain more fish species than salty oceans, although freshwater environments occupy only two percent of the Earth’s surface.

The findings suggest that most marine fish alive today are descended from freshwater ancestors, even though life is thought to have first evolved in the oceans.

A team of researchers led by Dr. John Wiens, from Stony Brook University in New York, studied the biodiversity of ray-finned fish, which make up 96 percent of all fish species.

The scientists created evolutionary trees based on molecular data and fossils, and a large database of fish habitats.

“Our results suggest that ancient extinctions in the marine environment may have wiped out the earliest ray-finned fishes living in the oceans, that the oceans were then recolonized from freshwater habitats, and that most marine fish species living today are descended from that recolonization.

“This pattern of ancient extinction and more recent recolonization may help explain why the oceans are now so species-poor, even for fish.”

The findings are published online in the journal Proceedings of the Royal Society B. 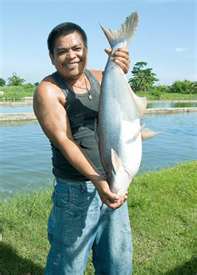