World no. 2 Rory McIlroy fires a superb 13 under par 65 in the second round sharing the lead with Denmark Thomas Bjorn at Dubai Desert Classic tournament.

World number four Martin Kaymer aced the 186-yard seventh and with a 67 was only two shots behind.

For Kaymer it was a first-ever hole-in-one, but the prize of a watch goes to his physio under a bet they have every week. “It will be a good celebration tonight,” he said.

Both Mcilroy and Kaymer have gone head-to-head in the Middle East before. They were first and second in Abu Dhabi last year, with Kaymer winning by a staggering eight-shot margin.

The 40-year-old Bjorn, who beat Tiger Woods to triumph in 2001, then matched McIlroy’s score.

Overnight leader Rafael Cabrera-Bello is one back after a 69, while world number four Martin Kaymer is 12 under and England’s Lee Westwood is 10 under.

The 22 year-old US Open champion turned in a four under 33, but for the second day running missed an eagle chance of under 10 feet at the long 18th and then failed from five feet on the first.

Overnight leader Rafael Cabrera-Bello, who opened with a nine under 63, was among the later starters and by the time he got going again he had been overtaken not only by the two Ryder Cup stars, but also by Scot Stephen Gallacher and South African George Coetzee. 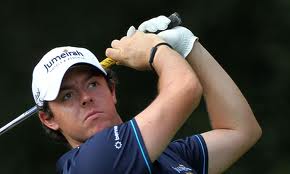