George Clooney was arrested and taken away in handcuffs by police after ignoring three warnings not to cross a police line during their protest outside the Sudan embassy.

The 50 year old actor’s father Nick together with Democratic U.S. Rep. Jim Moran of Virginia and National Association for the Advancement of Colored People (NAACP) President Ben Jealous, were also arrested for civil disobedience after protesting at the Sudan Embassy in Washington.

Those arrested were released within hours after each paid a US$ 100 fine. The actor described his short stint in jail as ‘rough’ adding it was his first arrest, and hopefully his last.

The award winning actor upon his release signs off at the booking desk for trespassing from Washington Metropolitan Police custody for his arrest .

His protest is centered on for an end to the plight of ‘innocent children’ in Sudan.

Clooney stressed out that he was there for, ‘is for the government in Khartoum to stop randomly killing its own innocent men, women and children. Stop raping them and stop starving them.’

The protestors accuse Sudan’s president, Omar al-Bashir, of provoking a humanitarian crisis and blocking food and aid from entering the Nuba Mountains in the county’s border region with South Sudan.

The actor, joined by his father continued to push his cause as he spoke to the media outside the police station moments after his release.

Clooney and his father Nick were protesting against the country’s humanitarian crisis and food and aid being blocked from entering the Nuba Mountains.

The group had held a sign that read: ‘Sudan: Stop Weapons of Mass Starvation’ as they walked to the site.

Sudan has refused to allow aid agencies into the region. Nancy Lindborg, an official with the U.S. Agency for International Development, told a Senate committee that Clooney testified before on Wednesday that 250,000 people are on the brink of a famine.

Clooney said in Washington it was imperative for the world to move swiftly to open a humanitarian corridor to those in need. 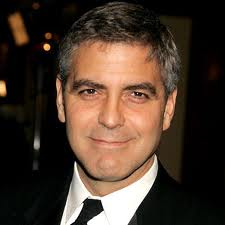