World no. 2 Rafael Nadal defeated David Nalbandian 4-6, 7-5, 6-4 in the BNP Paribas Open, setting up a meeting with world no. 3 Roger Federer in the semi-final.

Federer had an easier time in his quarterfinal, beating Juan Martin del Potro 6-3, 6-2 in just more than an hour for his fourth victory over the Argentine this year.

Nadal, the second seed, handed third seed Federer one of his two losses since last year’s U.S. Open when he beat the Swiss star in the Australian Open semifinals in January.

They will play Saturday, when rain and wind is forecast to move into the Coachella Valley, spoiling the sun and 80-degree temperatures that have prevailed during the two-week tournament.

Federer improved to 37-2 with five titles since the U.S. Open. His other loss came in Davis Cup against American John Isner, who advanced to the other semifinal against top-ranked Novak Djokovic.

Despite all his success, Nadal said he routinely has doubts about whether he can win matches and that only arrogant people don’t doubt themselves. 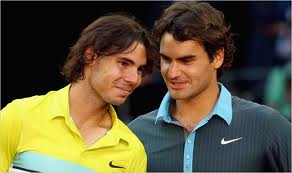