Over the years George Clooney, the Hollywood heartthrob has been the target of his sexual orientation.

Now, the Oscar-nominated actor has already spoken out about the speculation in an interview with U.S. based national gay and lesbian news magazine, The Advocate.

The 50 year old actor has told U.S. based national gay and lesbian news magazine, The Advocate that he doesn’t care if people think he is gay.

The Descendants star says that he doesn’t care if people think he is gay and would never deny or define when it comes to his sexuality, because it would be ‘unfair and unkind’ to his close friends who are homosexual.

‘I’m not going to let anyone make it seem like being gay is a bad thing,’ he said.
Clooney, who is also an advocate for gay marriage, says that the current government’s stance on the marriage equality is outdated.

There are even a lot of young conservatives today for whom marriage equality isn’t an issue. It always takes government an extra generation to catch up to the people.

Clooney’s close pal Brad Pitt has joked in the past about the gay rumors surrounding his friend, saying that he wouldn’t marry Angelina Jolie until his friend could marry his own partner.

Clooney says that Pitt’s joke is effective because it points out the ‘ridiculousness’ of marriage inequality.

People think Brad and I hang out all the time, but the truth is that we see each other very rarely, maybe a couple times a year. I’ve had great fun spending time with my friend again over the awards season,” he said.

Clooney has been dating Stacy Keibler for the last six months and the couple recently put on a stunning turn on the Oscars red-carpet on Sunday night.

And despite not winning the Best Actor accolade, Keibler made sure he went home with an Oscar of his own as her dress appeared to have been inspired by the statuette. 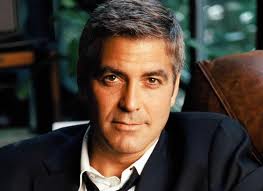