Glaucoma develops when the production of liquid in the eye known as aqueous humor increases or the liquid is not drained adequately. The pressure rises in the eye to unhealthy levels.

Nerve fibers and blood vessels in the optic nerve, which carries visual impulses of the eye to the brain becomes compressed and can be damaged or destroyed.

Glaucoma is a leading cause of blindness across Asia, topping the list in Hong Kong and coming a close second to cataracts in the Philippines. In Singapore, glaucoma accounts for 20 percent of blindness.

“Should there be some hints, the patient may still doesn’t know since there is a lack of general knowledge about the symptoms of glaucoma, says Dr. Saw Seang Mei, associate professor of the department of community, occupational and family medicine at the National University of Singapore.

In the Philippines, glaucoma is expected to become more prevalent, with the number of aging population increasing. Generally, those who are affected with glaucoma are adults above 40 years old.

Half of those with the problem don’t know they have it because the condition usually destroys eyesight without warning and often without symptoms.

If you feel sudden eye pain, it may be a signal that you have an acute form of glaucoma that can lead to blindness.

Acute glaucoma can occur when the drainage canal from the eyeball is suddenly closed off and the fluid pressure builds up rapidly, says Dr. Kevin Greenidge, a member of the glaucoma service at the New York Eye and Ear Infirmary.

Along with intense pain, you may have blurred vision and see rainbow halos around lights. Some people experience nausea and vomiting. This condition may be relieved promptly, but you must get to a hospital as soon as possible.

Acute glaucoma is an ocular emergency. “If not treated immediately, acute glaucoma results in complete and permanent blindness within two to five days,” Dr. Tony Ho, an eye surgeon for the Clearvision Eye Clinic in Singapore.

Although most common among Asians and people who are farsighted, acute glaucoma is rare. About 90 percent of those with the problem suffer from chronic glaucoma.

This happens when the drainage canals in the eyes are blocked gradually slowly. Symptoms include teary, aching eyes, blurred vision, occasional headaches, and progressive loss of sight.

“Family history of glaucoma, especially first degree relatives, is one of the major risk factors for developing glaucoma later in life,” says Dr. Liza Sharmini Ahmad Tajudin, a lecturer of the ophthalmology department at the Universiti Sains in Malaysia, in Penang.

Only an eye exam by an ophthalmologist can tell whether you have an early glaucoma. But you should be alert to any changes in vision such as blurriness or “blank-out” sights, says Dr. George Spaeth, professor of ophthalmology at Jefferson Medical College of Thomas Jefferson University.

Better still, early detection and treatment of glaucoma before it causes major vision loss is the best way to control the disease, according to Dr. Roque. 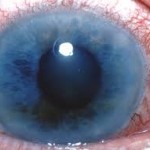