Researchers from the universities of Florida and Nebraska used fossils to follow the evolution of horses from their earliest appearance 56 million years ago.

The earliest known horse is known as Sifruhippus and appeared during a period known as the Paleocene-Eocene Thermal Maximum (PETM).

Studying fossils collected in Wyoming’s Bighorn Basin, researchers traced the evolution of Sifrhippus from a 12-pound animal that shrank during a 130,000-year period to 8.5 pounds – the size of a small house cat, then increased to about 15 pounds during the next 45,000 years.

As a result of global warming, scientists have discovered horses used to be a lot smaller than they tend to be now.

This was a time of warming lasting 175,000 years, in which increased carbon monoxide saw temperatures gradually rise by between ten and 20 degrees.

As temperatures went up their size went down, and vice versa, said Dr Jonathan Bloch, curator of the Florida Museum of Natural History.

The researchers say that the current warming could have the same effect on mammals, and could even make humans smaller.

Palaeontologists studying fossilized horses have found a direct link between the size of mammals and the planet’s temperature with warmer times meaning smaller beasts.

Dr. Bloch explained: ‘Horses started out small, about the size of a small dog like a miniature schnauzer.

‘What’s surprising is that after they first appeared, they then became even smaller and then dramatically increased in size, and that exactly corresponds to the global warming event, followed by cooling.

Philip Gingerich of the University of Michigan said that the study clearly demonstrates the relationship between temperature and body size and agrees this may occur as a result of current warming patterns. 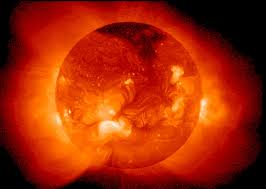