Dr. Drew Pinksy appeared on U.S. show The View where he discussed the now infamous photo of a slim Angelina Jolie exposing her right leg in a black Versace gown at the Oscars last weekend.

As the picture was shown on a screen behind him, he warned that women should not consider the actress as an ideal of beauty on account of her remarkably skinny figure. ‘She’s malnourished,’ he claimed.

‘We should not look at that as an ideal of beauty, even though she might be a beautiful woman,’ he added.

His comments came after he expressed the same verdict on Angelina’s ‘dangerously’ skinny frame during his own tv show earlier in the week.

Angelina, wearing sunglasses, chipped in to help Brad do the ordering at the Hollywood McDonald’s for some fast food where she went some way into proving her critics wrong .

The couple made the trip to the popular restaurant from their Hollywood home.

The star sat in the passenger seat alongside partner Brad Pitt as they ordered several bags of food from the drive-through.

The celebrity couple had twins Vivienne and Knox in the back of the car.

However, despite Angelina helping Brad order several bags of food, there was no actual photographic evidence of her tucking into a burger herself.

Back in November, Grazia magazine reported Angelina survives on as little as 600 calories a day, which is the equivalent of two bowls of cereal with milk.

‘Angelina has been known to start her day with little more than a spoonful of coconut oil and a handful of cereal,’ according to a source.

‘The worrying thing is that she is so busy, she often forgets to eat. Sometimes she’ll skip lunch altogether or will just grab a few almonds and some gummy bears while she’s on the go, or will have a protein-based shake rather than anything more substantial.’

Angelina’s fluctuating weight has been well documented, with her slim frame becoming painfully thin during difficult emotional times in her life.

The actress was forced to defend her waif-like frame in 2007, when her weight plummeted following the death of her mother Marcheline.

At the time, she said: ‘I have always been lean, and this year I lost my mum and I’ve gone through a lot.

‘Instead of people saying I look like a person dealing with something emotionally, they assume it’s because I want to fit into skinny jeans.’ 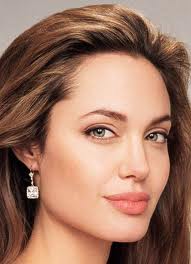