To help minimize the effects of global warming, the planting of trees and preserve forests are highly encouraged.

It is during photosynthesis that trees capture carbon dioxide and in so dong, it has removed the most abundant greenhouse gas in our atmosphere and store it in their woody tissue.

However, global warming may also affect the capacity of trees to store carbon by altering forest nitrogen cycling, according to a study led by Jerry Melillo of the Marine Biological Laboratory (MBL),

The study summarizes the results of a 7-year study at Harvard Forest in central Massachusetts, in which a section of the forest (about one-quarter of an acre) was artificially warmed about 9 degrees Fahrenheit above ambient.

The study confirmed, as others have, that a warmer climate causes more rapid decomposition of the organic matter in soil, leading to an increase in carbon dioxide being released to the atmosphere.

But the study also showed, for the first time in a field experiment, that warmer temperatures stimulate the gain of carbon stored in trees as woody tissue, partially offsetting the soil carbon loss to the atmosphere.

The carbon gains in trees, the scientists found, is due to more nitrogen being made available to the trees with warmer soil. 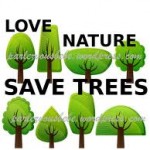