Gold has become a reference for policy makers and investors alike. Recently, World Bank president Robert B. Zoellick, has surprised economic experts when he suggested that the price of gold should be considered as a financial yardstick.

It has reversed the four decades use of paper currencies to store value in the international monetary system. Gold has traditionally been enclosed against rising inflation and political or economic uncertainty.

Gold is a good refuge for a weakening dollar, as investors were worried in Fed’s move to pump US $600 billion dollars into America’s banking system. An increase in borrowing around the world, will undermine paper currencies.

The price of gold is going up. The weak dollar, the unstable stock market, volatile economy, the budgetary deficit and the accommodating US Federal Reserve made people rushing for gold.

Over the last two months, the dollar has decreased by around 6 percent against other major currencies and gold has jumped 17 percent. Since the financial crisis of two years ago, gold has risen 91 percent.

The price of the precious metal has pegged as high as US $1,424 dollars an ounce this November, however it is still 40 percent below compared to its peak in 1980.

It is Washington that has prompted the latest increase. “As the Fed prints money, markets are anticipating that more dollars will be chasing the same supply of commodities, driving prices higher,” said Daniel Arbess, manager of the Xerion Fund at Perella Weinberg Partners in New York.

The Fed’s decision has met opposition from investors and sharp criticisms from many of America’s important trading partners, including Germany, China and Brazil.

“It’s in effect a protest vote that there’s something amiss with current policies,” said Abhay Deshpande, a portfolio manager with First Eagle Funds and a longtime gold investor.

“People are almost acting as their own central banks because the advantage of gold is that it acts as a hiding place in times of currency turmoil,” he added.

They say flooding the world with unwanted capital at a time when their own economies are already growing modestly increases the odds of inflation right there and then while encouraging one country after the other to devalue its currency.

As the dollar weakening its value, countries like Japan,Thailand, Brazil and other have taken steps to weaken their own currencies, in what some has observed is a race to the bottom.

“This bears some resemblance to the 1930s and the beggar thy neighbor strategy of currency depreciation between the pound, franc, D mark and dollar,” said James Steel, chief commodities analyst at HSBC. “In that period gold also did very well.” 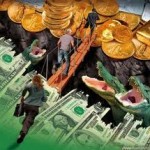