Philippine house bill no. 1090, authored by Rep. Philip Pichay of Surigao has some valid arguments as to why the Philippine Military Academy (PMA) is to be abolished.

Though the intention is noble, it is not probably the right approach if the reason of Mr.Pichay quoting his statements, is to lessen or eradicate the baneful effects of the mistah system in the military and police organization which often lead to destabilizing activities thus affecting the country’s economic growth.

The mistah system or camaraderie in any organization like the PMA cannot be prevented but it can be neutralized to some extent. It could be done by not abolishing the PMA but by amending the law that created it.

Since its creation the PMA stands as the only government military school in the country where previously the 4 branch of service with the inclusion of the defunct Philippine Constabulary, (Philippine Army, Philippine Navy and Philippine Air force) of the Armed Forces of the Philippines (AFP) are the main recipients of its graduates.

Now, that the perspective is much wider and the responsibility is much tougher and bigger, it is but appropriate to overhaul the law that created the PMA and upgrade it in order to cope up with the challenging times.

The PMA as it is now, should be split into the 3 entities of military institution of learning and training, namely, the Philippine Naval Academy, Philippine Air force Academy and Philippine Army Academy. Each should have its own school curriculum and training site and totally independent of its own.

The PMA itself can be converted into a governing body to be named as Philippine Military Education Board (PMEB) a DepEd or a CHEd like function that will oversee the functions and activities of these 3 schools once they are established.

It would be probably better if the Philippine Naval Academy is near a naval base and the Philippine Air force Academy near an air base which could be a practical move for hands on training purposes to both institutions.

And that leaving the PMA building at Fort del Pilar in Baguio, to be the site for the Philippine Army Academy.

The PNP on one hand, should be strengthened and oriented as purely a civilian police organization responsible purely for police matters and in fighting all forms of criminality in the country.

The AFP on the other hand, as it is, should be responsible for any threats of the country’s internal and external security.

This way the mistah system can be localized in each particular organization. Military adventurism whether in either small or large scale is not highly probable.

The military and police organization should be depoliticize and free from the influence of politics.

In the selection process of police and military key personnel it should exercise with due prudence by strict observance of the protocol based not only by seniority, merit system but a stringent moral criteria to be imposed on the candidate for key position, scrutinizing the candidate’s lifestyle since the time he started his early military or police career up to the time of his imminent selection and appointment.

By this way, the country can be assured that the selected candidate for the top post has the moral ascendancy to lead the organization, in getting rid of corruption, of scalawags, eliminate internal strife, discontent or demoralization among junior and senior officers within the ranks of the organization. 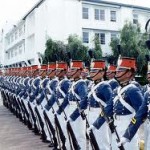 1 thought on “Should The Philippine Military Academy Be Abolished?”