The Spanish golf legend, Seve Ballesteros has died of cancer at his home in Pedrena (Cantabria), northern Spain.

He passed away surrounded by his immediate members of his family in the early hours of Saturday morning.

His family had said on his website, that he had suffered a “severe deterioration” of his condition.

Ballesteros, 54, was diagnosed with a malignant brain tumor after losing consciousness at Madrid airport on October 6, 2008.

He underwent four operations to remove the tumor and reduce swelling in his skull, as well as chemotherapy. 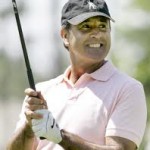