American Idol four finalists were set at two guys and two girls when Jacob Lusk was given the boot during the TV talent show.

The four remaining finalists are 17-year-old country crooner Scotty McCreery, rocker James Durbin, Lauren Alaina and Haley Reinhart, who had a good week after several times near the bottom.

Of the finalists, only Jacob Lusk and Haley Reinhart had ever landed in the bottom three. For Lusk it was the third, and it was his final exit.

Lusk, 23, from the gritty Los Angeles suburb of Compton, was eliminated on the show after he received the fewest of America’s 60 million votes.

He was composed in defeat, saying, “I think Americans fell in love with me,” and that he would now have a chance to put out more of the great R&B music that most inspires him.

Joining him in the bottom two was an emotional Alaina, who had tears streaming down her face long before she was spared elimination.

A pack of women singers went home in the finals’ early weeks, but with four men going home in the last four weeks, the final four was down to two men and two women. 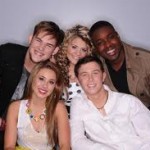