Martin Kaymer, 26, becomes the 14th player to top the ranking in golf and the second youngest player to be number 1.

Kaymer has won seven times in the last 2 years, including his first major at the PGA Championship in August, when he holed a clutch putt on the final hole and beat Bubba Watson in a three hole play-off at Whistling Straits.

He ended the 17 week reign of Lee Westwood who only had 3 wins on his world ranking ledger when he became no.1.

“When the rankings say that I’m the no.1, then I’m the best player in the world,” Kaymer said. 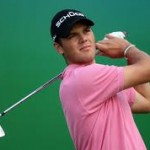