Stress and trauma is understandably taking its toll among Christchurch residents that has caused massive damage by the quake to property and loss of life that left at least 123 dead.

Police authorities had seen surge in family assaults, with many homeless in despair, experiencing without power and water, as some has turned to alcohol to cope.

The quake aftermath has brought enormous pressures and strain in families, relationships, people’s livelihood are now at its stake in these sorts of situation.

People lose a sense of stability and security that they are often directed to people who are close to them.

Certainly domestic violence is now something that becomes more obvious, although already a major problem, it could be expected to triple the incidence during natural calamities.

With the disaster, one in six New Zealand adults are estimated to have potentially dangerous drinking habits according to the health department.

As what Red Cross officer David Neal said on the disaster, “the biggest we’ve dealt with in recent memory.” 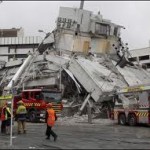