Gwyneth Paltrow has been better known as an award winning actress, but he has also shown that she is a capable singer in her own right, as seen previously in the movie ‘Duets’ and in the Glee TV series.

She also sang live at the 2011 Grammy Awards together with Cee Lo Green.

The ‘Shakespeare In Love’ actress is now enjoying her moment at the British Pop Charts with her version of ‘Singing In The Rain / Umbrella,’ and Cee Lo Green’s ‘Forget You,’ both are at pop chart nos. 24 and 29 respectively. 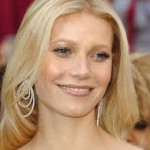