In a report by the Save the Children charity, five hundred million children could grow up physically and mentally stunted over the next 15 years because they do not have enough to eat.

In its report, it says that one in four of the world’s children have stunted growth, meaning their body and brain have failed to develop properly due to malnutrition.

Malnutrition contributes to the deaths of 2.6 million children each year, according to the report.

One parent in six said their children were abandoning school to help out by working for food.

A third of parents surveyed said their children complained about not having enough to eat.
Rising food prices could undo work to reduce child malnutrition, the charity organization warns.

The charity found that many families in the world’s poorest countries could not afford meat, milk or vegetables.

The survey covered families in India, Bangladesh, Peru, Pakistan and Nigeria. The survey was carried out in these five countries, where half the world’s malnourished children live, according to the international polling agency Globescan.

The charity organization said that a year of record food prices had worsened child malnutrition and could hit progress reducing child deaths.

“The world has made dramatic progress in reducing child deaths, down from 12 to 7.6 million, but this momentum will stall if we fail to tackle malnutrition,” said Save the Children chief executive Justin Forsyth.

Forsyth wants a global ‘hunger summit’ to address the problem of malnutrition.

Assumpta Ndumi, a nutritionist who works with Save the Children in Kenya, told the BBC’s Network Africa program that successive droughts are causing a downward spiral there:

“When another drought comes and livelihood assets are destroyed it becomes worse for families to be able to feed their children.

“Milk is very important for families in north-eastern Kenya, so when livestock is lost they basically have no access to a protein source.

“We need to address the hidden hunger because it’s killing silently.”

Food prices rose sharply in the first half of last year, according to the UN’s Food and Agriculture Organization (FAO), after severe weather in some of the world’s biggest food exporting countries in 2010 damaged supplies. 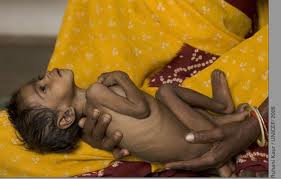