There are between 441 million to 663 million trees were killed by storm that swept the region in January 2005, based on a satellite data, on site observation and computer models calculation at Tulane University by researchers.

The destruction was equivalent to about 30 percent of the total deforestation caused by humans in the region around the city of Manaus that year, the study found.

The trees destroyed by the storm would have released carbon into the atmosphere equivalent to more than a fifth of the amount that is created each year as the world’s largest forest grows, the study noted.

The destruction of the world’s largest forest is believed to contribute up to 20 percent of the carbon emissions that causes global warming.

The biggest drivers of destruction in the Amazon are cattle ranchers and small farmers who clear trees for pasture.

The Tulane researchers said as more intense storms are likely to be one consequence of global warming it is increasingly important to find out the effect of powerful winds on the world’s forests.

“It’s really important that we start establishing some baselines here and understanding how frequently these storms occur,” said Jeff Chambers, who has been studying the Amazon for nearly 20 years.

Chambers reiterated that the result of the study showed a widespread drought in the Amazon that year, which had been blamed for the tree loss, was not the main culprit. 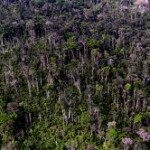