Statistics show that not only for wives in keeping their maiden names becoming less popular, but half of the US population would support a law stating that wives must take their husband’s name after their marital union.

The study, by sociologist Brian Powell and colleagues at Indiana University, asked 815 ‘nationally representative’ Americans to explain their views on name change choices.

Not only is it becoming more popular to ditch maiden names nowadays, but half of Americans support the idea of women being legally required to do so.

Results published by Gender and Society journal in April, highlight that Americans are more traditional than others supposedly.

And while 50 per cent of respondents said they’d be fine with a man taking a wife’s name, their attitudes towards the idea belied their opinion.

Maintaining personal and individual identity was cited as a reason for the 30 per cent who said that keeping a maiden name is best, while convenience, tradition and children were drivers for taking a husband’s name.

In terms of religious belief, the most likely to change their names were Catholics, followed by Protestant and then Jewish women.

In the study, it was also noted that women with higher educational levels and high powered jobs who were most likely to keep their maiden names. 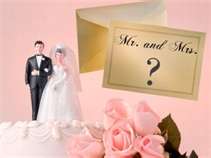