There has been too little data to know of what might be the safe level of red meat consumption.

However, the odds have signified that high levels of red meat consumption have also been linked to cancers of the breast, bladder, stomach and the pancreas.

Health experts suspect that haem, the pigment which give red meat its color, damages cells in the digestive system, which may lead to cancer.

In 1998, UK government officials said people could safely eat as much as 90 grams (3 ounces) a day and that only people who consumed more than 140 grams (5 ounces) should worry.

It is estimated that cutting down on red meat could save 3,800 Britons from dying of bowel cancer every year.

“This doesn’t mean people have to become vegetarian, but if you’re having a steak everyday, that’s probably not helping,” said Ed Yong, head of health information and evidence at Cancer Research United Kingdom. 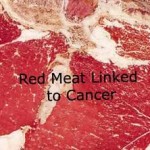